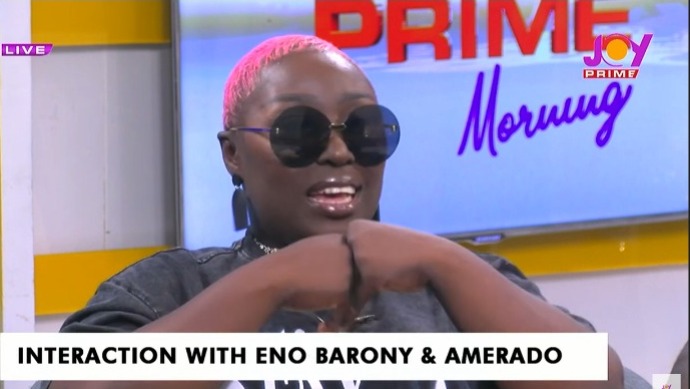 Ghana’s rap goddess, Ruth Eno Adjoa Amankwa Nyame Adom, popularly known as “Eno Barony,” has opened up about how she had to hide her career from her parents until she could not anymore.

Speaking in an interview with Asieduwaa Akumia on Prime Morning, on Friday, she indicated that it was difficult disclosing her career breakthrough to her parents, as they never wanted her to involve herself in secular activities.

Born into a Christian home, she indicated that listening to gospel songs was the only alternative, as her father did not condone secular activities. According to her, the circumstances in which she found herself made it difficult for her to open up to her parents after discovering her talent.

“Even boys who want to do rap find it difficult to convince their parents, especially responsible ones, to talk less of a girl who wants to do rap. ‘What will a girl be doing hip-hop for?’ is what they used to say. So I was hiding it in the beginning, and I hid it to the point that I couldn’t hide it anymore, because I was on TV and I was everywhere,” she said.

She further recounted how she had to run away from home just so she could pursue her career, as her parents were not happy with her kind of talent.

Being the first female rapper to win Rapper of the Year at the 3Music Awards in 2021, Eno Barony revealed that she discovered the skill at age 14.

When asked how the relationship with her father is, she said, “We’re cool.”

Even though she promised her father she would never venture into music to enable her to focus on her studies, her parents became angry at her change of mind. This, she said, stemmed from the feud between her parents and herself.

But she revealed that her father currently supports her music through prayers, as she is not dragging her family’s name through the mud.

Government urged to place taxes on SSBs to curb consumption