Fighting against a rugged brawler, 13 years younger, Azumah, 35, also battled against the roar and passions of the huge partisan crowds of 120,000, many of them waving Mexican flags.

Most of the fans had come to watch Julio César Chávez defend his world title against Greg Haugen in the evening’s main event. 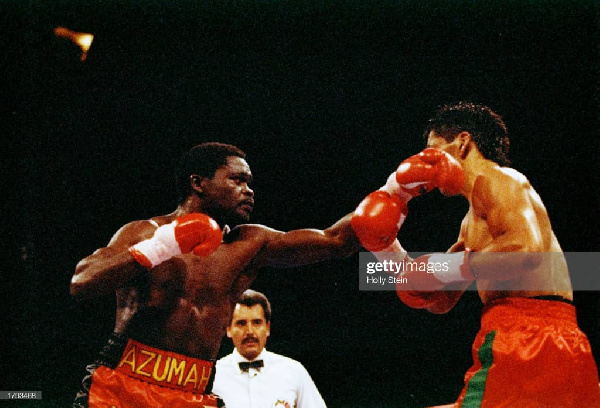 As the ring announcer introduced the champion, the crowd, described as the biggest live attendance at any boxing event in history, responded with boos and whistling while they cheered at the introduction of their man.

Azumah also hinted later that fight organisers had appointed all judges from Mexico but had to change two of them on protest from the Ghanaian side.

It was the most competitive encounter on a night of easy wins for all the other three champions on the four championship mega – bill, organised by Don King Promotions as homage to Mexican fighting legend Julio Cesar Chavez.

Ruelas, 22, fought with abundant courage and opened the fight with an impressive array of punches. But Azumah effectively counter – punched, landing left hooks to the head and body while leading with rapid right hand jabs.

With the referee frequently murmering something in Spanish to the Mexican, Ruelas often pushed Azumah to the ropes and clinched when ever in trouble.

Azumah later complained about the referee’s complicity in not warning Ruelas for pushing and holding. He also said in the post – fight interview, that the Mexican butted him a number of times resulting in a cut at the back of his head.

Azumah appeared to have won the first round but the remaining rounds were closely fought until the last three rounds saw the champion coming up again to ride home victorious.

Ruelas was so diappointed that he unceremoniously stalked out of the ring and the huge crowd whistled and booed when the verdict was announced.

In the fourth and main fight of the night, Julio Cesar Chavez thrilled his countrymen by dominating American challenger Greg Haugen from the opening bell until referee Joe Cortez stopped the bout at 2:02 of the fifth round.

A determined Chavez knocked down Haugen in the first round with an overhanded right to the head, kept up a steady barrage of punches and then finished him with a flurry of punches to the head and body.

Cortez, from the United States, stepped in when Hagan could no longer defend himself. The two fighters had exchanged bitter words in the days leading up to the fight and in the ring they exchanged menacing glances between rounds.

Before the bout began, Chavez refused to shake the American’s hand.

But after the match, the two embraced briefly

The two sides failed to score during regulation time but Enyimba accelerated and scored a goal in each half of extra time as a 10-man Hearts’ side run out of steam to salvage their image.

The Nigerians had a man advantage for the last 20 minutes of normal time and extra time after Hearts’ Lawrence Adjei left the pitch injured and the Ghanaians had already made all their substitutions.

The first half was evenly balanced with both sides having chances that they failed to convert.

Enyimba dominated the closing stages of the match but were unable to convert any of their chances.

The deadlock was eventually broken in the seventh minute of injury time when Mutiu Adegoke found the back of the net following a goal mouth scramble.

Adegoke then turned provider in the fifth minute of the second period of extra time when his cross was headed home by the Benin international Muri Ogunbiyi.

Hearts’ goalie, Sannie Mohammed stood between Enyimba and a goal harvest particularly in the first half of regulation time, as he pulled some tremendous saves to the chagrin of the home fans.

Enyimba coach Okey Emordi was happy with the victory.

“We struggled against a good side but we deserved this victory,” he told BBC Sport after the game.

Hearts coach, Cecil Jones Attuquayefio, was philosophical after the match.

“One thing that happened today is that two of the continent’s best sides clashed today but one must emerge as winner and this time it was Enyimba,” he said.

The Ghanaian side’s captain Yaw Amankwa Mireku said his team were not disappointed they lost the game.

“We are not disappointed because Enyimba played very well and deserved their victory,” he said.

The game finished in a heavy downpour but nothing could dampen the jubilation from the capacity crowd in the stadium in Aba.

It was another double for the Nigerians who recorded the same feat a year before and became the second club in many years to win the Champions League back-to-back.

Hearts also made it double in 2000, winning both the Champions League and the Super Cup.

The annual African Super Cup clash is played between the winners of the Champions League and the Confederation Cup champions.

This was Ali’s first boxing bout after Thrilla in Manila. Ali won the fight after knocking out Coopman in the fifth round.In an interview, Coopman denied claims that he had been drinking champagne before the fight, but confirmed that he had drunk some champagne during the fight to help him move faster and to feel euphoric.

In the ring during the introduction, Coopman smiled easily while Ali stared at him. In his orange robe with a small black lion over the left breast, Coopman sat on the stool in his corner and appeared to enjoy Ali’s attempted psych. But when the bell rang for the first round, the Belgian stopped smiling.

Ali had a 20-pound advantage in weight at 226 over 206 and a five-inch advantage in reach, not to mention his advantage in skill and experience. In the first round, he coughed twice midway through the round, then coughed up his mouthpiece near the end of the round. Ali is recovering from a recent battle with a flu.

Through four rounds, Ali was operating in a flatfoot stance, peppering Coopman with a flurry of punches whenever the mood struck him. In the fifth, the champion start to dance, circling to his left, then to his right, and confusing Coopman with backhand jabs. Then suddenly, Ali unloaded the big uppercut.

With a flurry of punches, culminated by a right uppercut. Ali toppled the 29-year-old challenger into the ropes. trying to regain his equilibrium, Coopman wobbled back into the canvas in an apparent delayed reaction from the punch. Coopam was counted out by referee Ismael Quinones-Falu at 2 minutes 46 seconds. The referee and the two judges, Ismael Fernandez and Roberto Ranirez, each had rewarded Ali a 10-9 advantage in points in each of the first four rounds.

Moments later, Coopman was dragged to his corner, with Ali helping. It was easy as if Ali had use a whip and a chair. Ali may have never had an easier fight. It might be considered more of an appearance than a competition. Coopman plodded forward aggressively. but not skillfully, His punches seemed to touch Ali rather than hit him. About 20 minutes after the bout, Ali appeared in the interview area, dressed and relaxed.