The Bono Regional Police Command has released the body of a 48-year-old charcoal burner, Abu Bukari Bahala, who was allegedly killed and secretly buried by three police officers at Seikwa in the Tain District for re-burial in Sunyani.

The body was released to family members at the Sunyani Regional Hospital after an autopsy was conducted by a Senior Specialist Pathologist at the Komfo Anokye Teaching Hospital (KATH), Dr Ernest K. Adjei, on Sunday, April 25, 2021.

The pathologist described the death as unnatural, as Bahala died due to a chest injury and blunt trauma to the chest.

The deceased was said to have smashed the car windscreen of the Manager of the Nkoranman Rural Bank, Mr Emmanuel Ofori, as a result of which he was beaten to death. The registration number of the vehicle is AS 2000- X.

Family members of Bahala re-laid the body at the forecourt of the Sunyani Regional Hospital Mortuary to perform Islamic religious rites for his second burial. 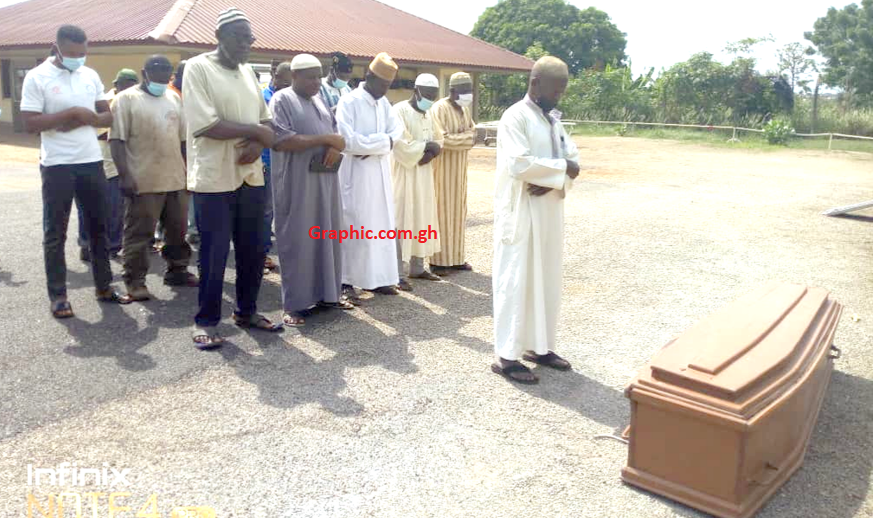 The three police officers who were remanded by the Sunyani Circuit Court last Tuesday for their alleged involvement in the death and secret burial of Bahala are Chief Inspector Eric Aforo, General Corporal William Apussung and General Constable Ebenezer Akuffo.

The policemen and two security men of the Nkoranman Rural Bank, Rubin Obeng and Aaron Abbey, were alleged to have brutalised Bahala to death and buried him secretly at night to cover their crime.

A spokesperson of the family, Mr Abdul Raman, told the media that the family were so far satisfied with the court’s decision to refuse bail for the accused persons and the cooperation and commitment of the police on the matter.

“We are happy with the level of court proceeding so far and the level of police cooperation, commitment and support to the family,” he stated, explaining that the police directed the hospital to release Bahala’s body for re-burial.

Mr Raman explained that the family had never witnessed a re-burial matter before and would thus demand some rituals to be performed by the elders before he was interred.

He said the family had agreed to re-bury Bahala in Sunyani, adding that the family had nothing against the chiefs and people of Seikwa, where the incident happened.

Mr Raman debunked the claim that Bahala was a mentally challenged person, explaining that he was fit and strong in the community.
He said the deceased was a charcoal burner and a private security man who had three children, two males and a female.

Mr Raman called on the judiciary and the Ghana Police Service to ensure their departed brother got justice, saying “what will make us happy is to get justice for our brother. We are happy about the proceedings so far”.

He said the family would have managed to fix the windscreen of the vehicle if the incident had been reported to it.

On Friday, April 16, 2021, the Manager of the Nkoranman Rural Bank, Mr Emmanuel Ofori, reported to the police that Bahala had smashed the windscreen of his vehicle.

After Bahala had smashed the windscreen of the said vehicle, Obeng and Abbey, who are the private security personnel, along with others, attacked and beat him mercilessly before sending him to the police station.

According to the police at the station, Bahala was violent, compelling the policemen to push him to the compound of the rented police quarters, where they managed to handcuff him.

Later, the police realised that the deceased had become weak and rushed him to the Seikwa Health Centre for treatment but he was pronounced dead on arrival.
Chief Inspector Aforo, the Akyeamehene of the Seikwa Traditional Area, Opanin Asuman, together with some boys, assisted him to bury the deceased.

When rumours went round in the community about the incident, the culprits realised their mistake, exhumed the body and sent it to the mortuary.

I have over 4, 000 pastors under my control – Kwaku Bonsam

Agradaa pleads with Pastor not to burn 3 of her gods. See secrets revealed.