World Food Program(WFP) has presented 140 hermetic silos to smallholder farmers in the Northern Region to help save and store their grains to avoid losses recorded after harvest.

Each of the plastic hermetic silos stores 500 kilos of grains; maize, soyabean or cowpeas amongst others, preserving farmers grains from pest, fungal infection and effects of high moisture levels.

The presentation of the hermetic silos to the farmers formed part of the Enhancing Nutrition Value Chains (ENVAC) Initiative implemented by the WFP from 2016 to 2021 with funding from Canada.

The ENVAC was an integrated program, which had worked to address some of the challenges facing smallholder farmers equipping them to produce good quality food and linking them up to agro food processors and structured markets.

Under the project, agro food processors had been supported to produce high quality specialized nutritious foods to improve nutrition especially amongst vulnerable women and children. 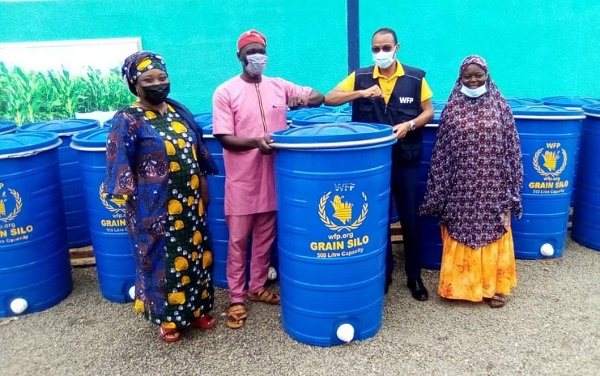 Madam Rukia Yacoub, WFP Country Representative, who spoke during the handing over ceremony in Tamale, said “The provision of these silos is complementary to the Planting for Food and Jobs Initiative, which has increased food production.”

She said it was to address this concern that “As part of ENVAC Initiative, 700 units of durable locally-manufactured hermetic silos are being giving to farmers in five regions; Upper East, Upper West, Northern, Ashanti and Bono East Regions. Today, the Northern Region receives theirs.

She spoke about the quality level of the silos saying “They are air-tight, and do not allow air and moisture to enter once well sealed. This means farmers can save grains from pest, fungal infection and effects of high moisture levels. This contributes to improved post-harvest management and food security. It also enables farmers to keep the grains until they get profitable market for their produce.”

She said “Last year, 30 demonstrations on post-harvest loss were held in the five regions in partnership with the Regional Departments of Agriculture. The farmers testified that the plastic hermetic silos could effectively preserve grains 12 per cent better than polyprofilin bags.”

Madam Yacoub spoke about food shortages recorded in this period as a result of the normal lean season saying “Next year by this time, I look forward to a different story as the silos should reduce food loss so that farmers can rely on their own stocks for longer periods.”

Mr. Chris Nikoi, Central and West Africa Regional Director of WFP said food safety and quality are important elements to enable farmers get a premium for their produce, be able to access new markets and to contribute to overall reduction in food insecurity in their households and the country and beyond.

Mr. Nikoi said “I believe that Ghana has the potential to become the bread basket for the West and Central Africa Region if efforts to improve its food systems such as some of the initiatives the WFP and government have begun are sustained.”

He encouraged all stakeholders in the food security and nutrition sector to increase collaboration and to build synergy for more effective delivery challenging farmers to work as business people to improve their own livelihoods and feed others.

Madam Hawa Musah, Director of the Northern Regional Department of Agriculture, expressed gratitude to WFP for its continued support to farmers to adopt improved food storage facilities urging the beneficiaries to use the facilities well to achieve the intended purpose.

Mr. Abdallah Mohammed Sugir, a beneficiary farmer, who spoke on behalf of other beneficiaries, said “It was in July, last year, when we started the demonstrations. We filled the silos with maize and up to date the maize is still intact in the silos. Previously, it was in the local sacks and it started going bad before they brought the silos.”

He added that “We are happy about the results and the maize is still in the silos. It is very good. Air does not enter. Even if your warehouse is leaking, you do not care, because water cannot enter the grain.”

Fyre ft Zigi Blaze – The One (Prod. By Pino Made It)