Minority MPs are seeking an injunction over E-Levy implementation

E-Levy was passed amid a Minority boycott

The Majority Caucus in Parliament has denied that their leader, Osei Kyei-Mensah-Bonsu, met with some members of the judiciary following a suit filed by some members of the Minority seeking to halt the implementation of the controversial Electronic Transfer law (E-Levy) from May 1.

In a statement copied to GhanaWeb, the Caucus described as “reckless insinuations” and “condemnable,” comments made by Samuel Okudzeto Ablakwa, MP for North Tongu, indicating that the Majority Leader and Minister for Parliamentary Affiars, has become the mouthpiece of the Supreme Court.

“It is expected that the right-thinking members of the Minority Caucus he belongs and the political party he represents, would draw his attention to a picture of bias his comments create for the Judiciary and the vicious consequences thereof for our democracy,” the Majority Caucus said in their Wednesday, April 27 statement.

It added: “The Majority Leader Osei Kyei-Mensah-Bonsu has not had and would not have any such clandestine meetings in any form whatsoever with the Judiciary over this or any other suit.”

Samuel Okudzeto Ablakwa’s comment, the Majority believes “draws the attention of bias for the Judiciary” and also creates “vicious consequences” for Ghana’s democracy.

“Very puzzling how Majority Group Leader and Minister for Parliamentary Affairs, Osei Kyei-Mensah-Bonsu has become the official mouthpiece of the Supreme Court as he asserts that our case on the unconstitutional passage of the repugnant e-Levy is “dead on arrival.”

“What gives him such unabashed effrontery and what does he know that the rest of us do not know?”

“Certainly the kind of condemnable conduct which undermines the independence and credibility of the judiciary — another transgression that would only aggravate the legitimate fears of National Security Minister Kan Dapaah,” Ablakwa’s post concluded.

Osei Kyei-Mensah-Bonsu while speaking at a Majority Caucus press conference on Friday, April 22, described as “dead on arrival” the Minority’s application to the Supreme Court seeking an injunction on the implementation of the E-Levy.

He indicated that once the President assents to the bill and its operation is not postponed by Parliament, the Bill comes into operation.

“They say they want to stop the implementation but the bill is already enacted. I don’t know what they mean by that. Upon the assent of the President, the bill if Parliament has not postponed the operation of the bill, immediately after the assent it comes to operation… It appears you and I would know that it is going to be an exercise in futility,” he said.

Kyei-Mensah-Bonsu noted that the act by the Minority not to exhaust the processes and procedures in Parliament and rather seek redress in court would come back to haunt them in the future.

Below is the full statement from the Majority Caucus: 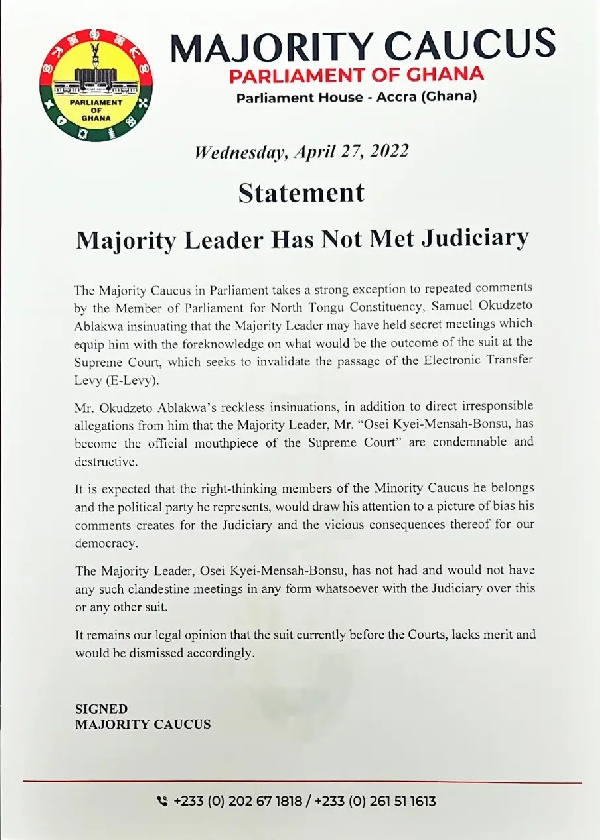