Suspects were at the Okaikoi South Constituency

DCOP Kwesi Ofori, Director-General of Public Relations, in a statement issued on Thursday, April 28, 2022; explained that the suspects, John Essel Baah and Enoch Kwame Bosompem, were in some police apparel, which created an impression that they were security personnel.

The suspects, the police said, “were spotted at the Okaikoi South Constituency where the voting was taking place.”

“We would like to emphatically state that the two suspects are not Police Officers. Meanwhile, they are in custody as the investigation continues.

“We wish to assure the public that they will be taken through the due process of the law,” the statement from the Police concluded.

There were agitations at the voting centre in the constituency during after some members protested allegations that about 400 names had been removed from the register.

Also, there were allegations that some members of the National Democratic Congress (NDC) have been added to the register to increase the fortunes of some aspirants.

However, the police managed to restore calm for the exercise to commence.

Four delegates were reported to have been arrested for obstructing the elections in Okaikwei South.

The NPP started electing its Constituency executives on Thursday, April 28.

Meanwhile, about 16 Constituencies have been exempted from taking part in the ongoing process which ends on May 1.

Read below the full statement. 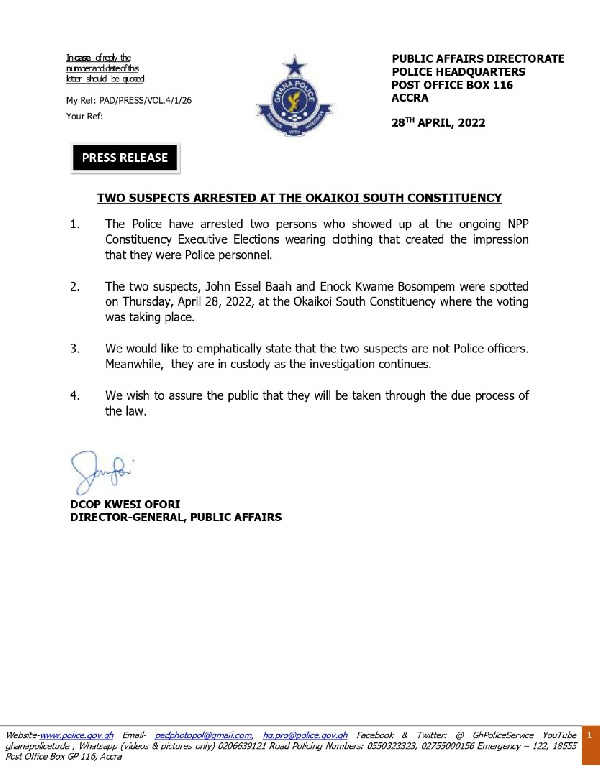