Founder and leader of the Prophet Hill Chapel, Nigel Gaisie has commented n the race for the New Patriotic Party flagbearership slot for the 2024 general elections.

In a post on his social media handle, he stated that the contest will largely to be a two-horse race between Vice President Dr. Mahamudu Bawumia and Trade and Industry Minister, Alan Kyerematen, and that it will produce a winner with a “slim margin win.”

He indicated however that the “Asante man [Alan Kyerematen]” must up his game as there were a lot of orchestrations against him.

“I just had a terrible vision, the internal contest will be a SLIM MARGIN WIN….The Asante man must up his game***lots of forces against him,” Nigel Gaisie posted on his Facebook page.

Dr. Mahamudu Bawumia and Alan Kyerematen are reportedly aiming to lead the NPP into the 2024 elections to “Break The 8”.

Recent surveys by Global Info Analytics have projected that Alan Kyerematen will beat the Vice President in the NPP primaries to secure the flagbearership slot. 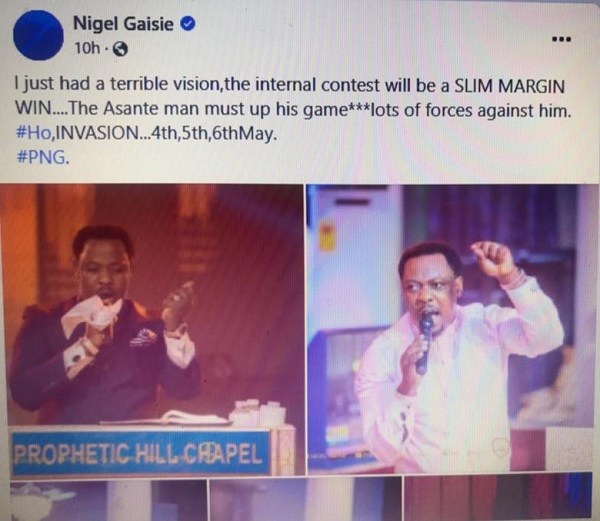