Akufo-Addo is in the US on official business

The Member of Parliament for North Tongu, Samuel Okudzeto Ablakwa, has disclosed that the state made savings equivalent to over 3.3 million cedis because President Nana Addo Dankwa Akufo-Addo opted to fly commercial on his latest trip to the United States.

According to the National Democratic Congress (NDC) MP, who has serially been tracking the president’s travels especially the use of luxurious chartered jets, he was happy that the president opted to fly commercial.

In his opinion, the President flew commercial because of what he described as the “overwhelming outrage of the Ghanaian people.”

His social media post on the latest trip read in part: “I can confirm that President Akufo-Addo appears to have listened to good counsel from an overwhelming number of outraged Ghanaians and so flew commercial aboard United Airlines on his current trip to the United States.

“At generous conservative estimates, the Ghanaian taxpayer has been spared some US$442,000.00 which translates to savings of 3.3million Ghana Cedis.”

Samuel Okudzeto Ablakwa disclosed further that the president did not go via a commercial plane and then joined another private jet to his final destination like he allegedly did in previous instances.

“Further tracking and our usually unimpeachable surveillance also reveals that he hasn’t done a “meet me there” on this particular travel as he has completely avoided his favourite ultra-luxury toys which he seems addicted to in recent years.

“Considering the President’s profligate and obstinate track record, we should probably consider his latest conduct as a Damascus experience, especially as he was on his way to speak at the Museum of the Bible, where he declared himself a Christian in politics,” he added.

This is the second time in as many months that Akufo-Addo has travelled commercial on official trips.

In March this year, he flew on Emirates together with his delegation to the United Arab Emirates to attend the Dubai Expo 2020.

“By commendably opting to fly First Class on Emirates and avoiding another extravagant charter, President Akufo-Addo has saved the Ghanaian taxpayer an impressive US$468,000.00. That is equivalent to a staggering GHS3,306,139.20.

“So, instead of doling out another colossal installment of 3.3million Ghana Cedis to a European company, we get to keep it in Ghana, and hopefully, use it for something more prudent,” Ablakwa’s post at the time read. 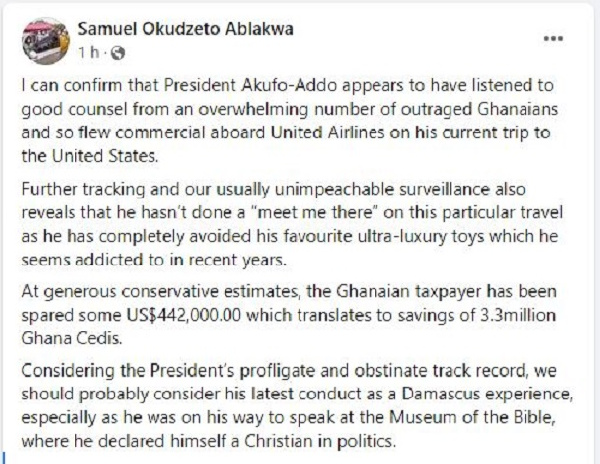