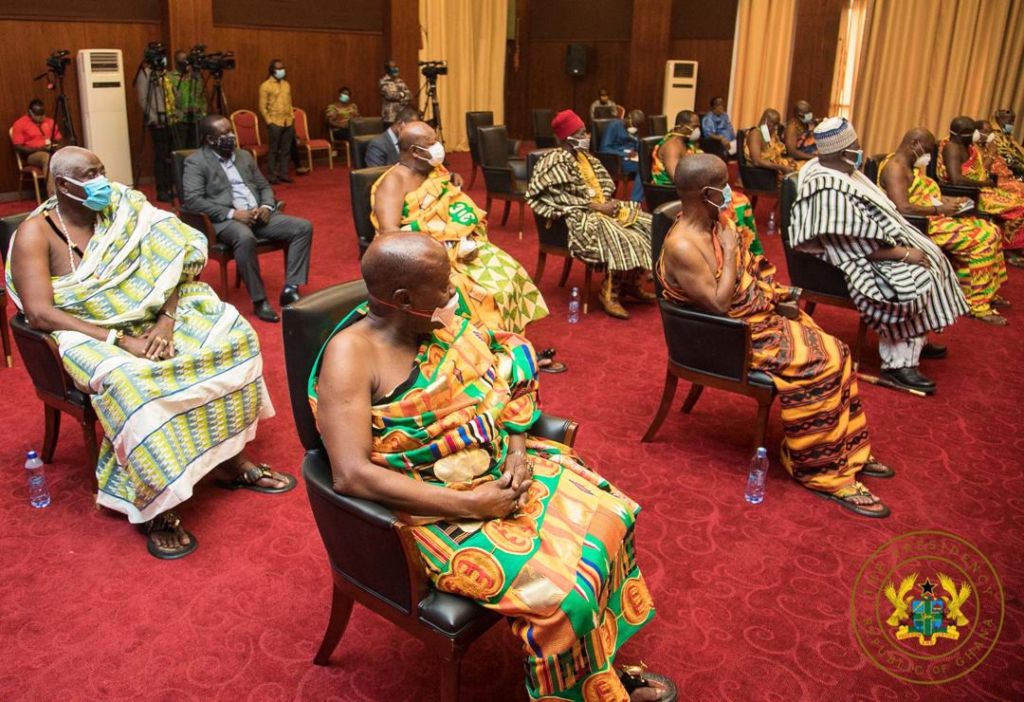 Some members of the National House of Chiefs are pushing for the amendment of the Stool Lands Act, 481 of 1994.

The Act which mandates the Office of the Administrator of Stool Lands (OASL) to mobilise and disburse revenue from stool lands has been described as unjust and averse to the tenets of transparency and accountability.

Nananom intimated that while they have previously attempted to have the law revised, their demands have gone unheeded by successive governments.

According to the Paramount Chief of Asante Mampong, Dasebre Osei Bonsu, the Nananom were overlooked by the Evans Atta Mills administration when the government submitted certain proposals and recommendations to the Constitutional Review Commission at the time.

“During President Mills’ tenure government undertook a major assignment of instituting a commission tour of the whole of Ghana to accept and deliberate on proposals for amendment of the constitution.

“We sat down and wrote detailed memoranda and raised some major highlights and recommendations that we raised for the attention of Prof. Mills and his cabinet that Article 267 was not one of the entrenched clauses and so needed to be issued a white paper for parliamentary action”.

“We also proposed that from practice 55% out of the remainder of the 90% for the Assembly should be reduced and then added up to the 25% to the chiefs at the paramountcy for maintenance of their status. And then the 20% use by the traditional council…I followed this up and what happened was this proposal that was submitted to Prof. Mills he just jettisoned it out,” he said.

The Stool Lands Act, 481 of 1994 directs that: “Of the revenue accruing from stool lands 10% shall be paid to the OASL to cover administrative expenses. The other 90% is to be disbursed in the following proportions: 25% to the Stool for its maintenance; 20% to the Traditional Councils; and 55% to the District Assembly.”

According to the Okyenhene, outsourcing the collection of rent to the Office of the Administrator of Stool Lands is counterproductive and must be revised.

“I can’t believe that monies that are collected on our behalf on rent can be kept at the Ministry for about two years. It comes back to us with no interests or documents. And you can’t even go and check your records and see the amount I get for a year for me to get 20%.

“The law for me is unjust. You cannot call me a landlord and somebody else is managing the rent. As if I cannot collect my own rent and have the government tax me. So we Nananom will have to form a committee to challenge this law. Kwame Nkrumah made this law to take away our financial backbone from us. This is a sham,” he said.

Meanwhile, the Dormaahene, Osagyefo Oseadeyo Agyemang Badu II has called on the Deputy Lands Minister to upward adjust the lands rate being collected.

According to him, the royalties being presented to the Nananom are paltry sums that are barely enough to support them as they go through the current economic hardship.

“If you look at the conditions now, the Deputy Minister of Lands and Natural Resources, how soon are they going to adjust the rate applicable to what Nananom will receive? Because not quite long, just yesterday, my registrar told me about a certain amount that has come, I look at the amount, and I was like are you sure registrar? So he posted the thing on my WhatsApp and I looked at the thing and was just smiling.

“So we appeal to the Deputy Minister for Lands, with respect, I think that there’s a need to adjust the rate. Nananom are here, we want to hear whether it has been adjusted or not. Because we cannot on our own adjust it so that whatever we will receive from the administrator of stool lands will withstand the current economic difficulties we are in”.

The government’s engagement with the National House of Chiefs follows the introduction of the New Lands Act.

According to the Deputy Lands Minister, Benito Owusu Bio, the new Act would help resolve issues related with multiple sales of lands, the proliferation of land guards among others.

“To resolve these challenges, the land act aims at revising, harmonising and consolidating the laws on lands and to ensure sustainable lands administration and management, effective and efficient land tenure and to provide for related matters,” he assured.

IET whips up engineering interest in young ladies with scholarship

Outlook of cedi to depend on whether Ghana reaches IMF agreement