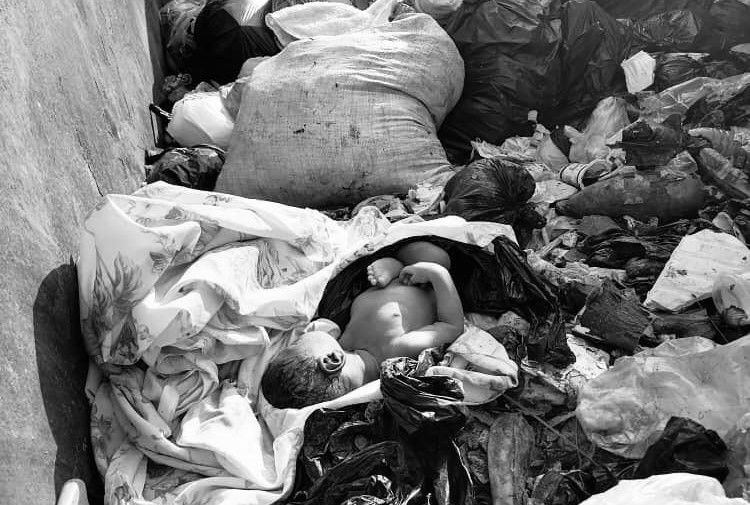 Residents of Atasemanso, a suburb of Kumasi have been thrown into a state of shock following the discovery of a newborn baby abandoned by its mother on a heap of refuse in the community.

The baby boy believed to have been delivered the same day was found wrapped in a cloth and placed in a black polythene bag.

The lifeless fair-looking baby was discovered by the refuse attendant in the area in the late hours of Thursday.

A resident, who was shocked at the beautiful looking baby, was seen heaping curses on the faceless mother who might have perpetrated the act.

It was all wails and utter disquiet as residents of Atasemanso watched in dismay the lifeless baby lying in the midst of plastics and other waste materials.

The day-old baby was found with a portion of its umbilical cord still attached to the navel and wrapped in a blood-stained white cloth.

Refuse attendants were on their usual morning routine of sorting out waste when one of them hit their foot against a polythene bag, later found to contain the remains of the unidentified baby.

“I went into the container myself and opened the polythene bag and I realized it was a fresh baby. Definitely, it was either the unknown mother who gave birth this morning or in the middle of the night. Looking at the position of the container, it was placed at the back of the bin,” one of the refuse attendants said.

According to the residents, it is the first of such happenings in the community.

“Since my eighteen years of staying in this community, I haven’t heard or seen anything of this kind here. This is my first time,” one of the residents at the scene said.

The refuse attendant explained his predecessor has been finding aborted foetuses in the bin.

“The guy who used to look after the bin used to discover aborted foetuses, some of whom were about 2 months old,” he said.

The remains of the baby have since been deposited at the Komfo Anokye Teaching Hospital morgue. Investigations are currently underway by the Police.