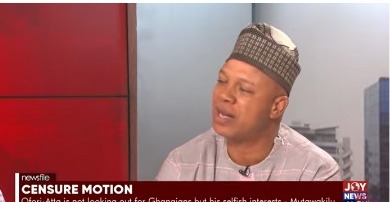 A former Member of Parliament for the Damango Constituency has added his voice to speculations regarding why the Finance Minister, Ken Ofori-Atta has refused to resign despite numerous calls for him to do so.

Mr. Adam Mutawakilu has alleged that Mr. Ofori-Atta is serving his selfish interest.

“His point of apologizing and blaming external and inherited factors, to me means that the Finance Minister, Ken Ofori-Atta is not in for Ghanaians. He is in to satisfy his selfish interest,” he said on JoyNews’ Newsfile on Saturday.

Mr.  Mutawakilu’s assertion follows several calls on the Finance Minister by individuals, Civil Society Organisations and recently, the Minority MPs and some of their Majority counterparts.

The Minority MPs have proceeded to file a censure motion against Mr. Ofori-Atta which has been referred to an ad hoc committee for consideration.

Although they are not supporting the censure motion, 98 MPs belonging to the governing New Patriotic Party have threatened to boycott any government business tabled by Mr. Ofori-Atta. An assurance by President Akufo-Addo to relieve Mr. Ofori-Atta of his post after negotiation with the International Monetary Fund has been concluded, has been rejected by these MPs. They insist that the Finance Minister must resign or be sacked.

In spite of these developments, Mr. Ofori-Atta remains at post. Appearing before the Committee hearing the censure motion on Friday, he acknowledged the economic difficulties being experienced by Ghanaians and apologised. The Finance Minister however denied being responsible for the current state of affairs.

But the former Minority Spokesperson on Mines and Energy said Mr. Ofori-Atta’s apology is neither here nor there.

“Even if he was performing well and Ghanaians say we don’t need you…98 of your own MPs, that’s about 72% of your MPs, 100% Minority MPs said they don’t need you, majority of civil society organisations say resign. The best thing is that, oh I am working for you. You are saying that I should resign. Ok, let me resign. But all these groups saying that you should resign but you won’t resign, it means that there is something beyond working for the people…What he is benefiting is more than his salary,” Mr. Mutawakilu alleged.