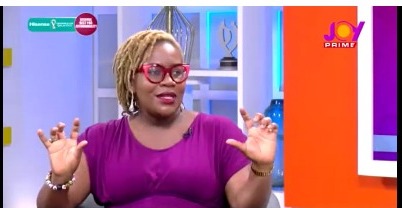 Certified clinical sex therapist and relationship coach Cessa Lucci Aggrey, has asserted that women are naturally born to be detectives.

Speaking on Prime Morning on Thursday, she indicated that women are the best investigators in most relationships.

According to her, women have different techniques for identifying the odds of their partners, making them the best detectives.

“Most times we let our fears override the positive vibes. Also make your investigations, especially for women. I’ll tell women that we’re born detectives. That’s what women are born into,” she said.

The relationship coach entreated women to put aside bias and be open-minded in their relationship so as to have a successful one.

Speaking on the topic, “Dating Apps: Identifying Genuine Partners and Red Flags,” Mrs. Aggrey stipulated that knowing one’s worth before venturing into a relationship helps in strengthening the union.

“I always say know your values first before you go into a relationship and know the other person’s value,” she asserted. Get to talk and make these hard conversations.”

Because most people use dating apps for personal gain and fraud, they are assumed to be fake and untrustworthy.

But, using herself as an example, she revealed how her marriage has been successful after 10 years, even though she received her husband’s proposal online.

“I got married over the text space. My husband just messaged me online on Yahoo. “On the 31st night, the only night I refused to go to church,” she explained.

“I sat down and was checking out pictures when this guy started chatting with me, and then he asked me, “Will you marry me?” and I said “of course,” she added.

Despite the fact that her situation appeared strange to family and friends, she and her husband have four children and are expecting a fifth soon.

She also added that most men feared her job as a sex therapist, but her husband supported and encouraged her, though they mostly communicated online.

She believes hard conversations and effective communication are major contributory factors to her successful marriage.

Mrs. Aggrey admonished partners to engage in hard conversations, saying it will enable them to figure out some red flags. She warned women to beware of “sending nude pictures to first-time online partners.”

However, online partners are cautioned to watch out for red flags such as catfishing and impersonation, among others.

2023 budget must not be business as usual – IEA

We are going for revenge against Uruguay – Mohammed Salisu